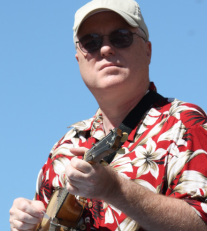 Raised just outside the Mound City of St. Louis in Webster Groves, MO, this international man-of-mystery first heard old-time music as an infant, being played by his grandfather, Buck Belt, on the guitar and fiddle. His immediate reaction was to roll over in his basinet and go back to sleep. A few years later, he picked up an lp recording by Roscoe Holcomb at his local library, gave it a spin, and the poor lad was never the same again.

About ten years ago, Sean heard and played his first banjo ukulele and the experience was much like that first hearing Roscoe Holcomb; the boy had found his muse in the little drum with strings.

Sean’s short attention span has led him to learn to adequately play guitar, banjo, fiddle, mandolin, mountain dulcimer, autoharp, and ukulele. When not actually playing one of these instruments, he contents himself with listening to Mississippi John Hurt, Son House, Reverend Gary Davis, Tommy Jarrell, Fred Cockerham, The Incredible Stringband, Mike Seeger, Pete Seeger, John Salyer, Marcus Martin, Don Pedi, French Carpenter, Melvin Wine, Jimmy Triplett, The Ill-Mo Boys, The Indian Creek Delta Boys, The Horse Flies, and the dozens of others who’ve influenced him and his playing and taught him over the years. 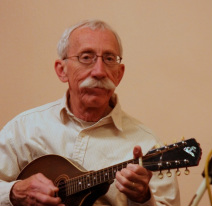 Despite having a father who at 12 earned shoe money playing mandolin and guitar with his uncles for house dances in rural Kentucky (13 cents a set—you only paid if you danced), there wasn’t much country music around my house as Dad had stopped playing.

I came to bluegrass and subsequently old time music in college thru Rich Hibbs, an Alton native like myself and a great banjo/guitar player, who was living in St. Louis and running with a fast crowd, including Nicki and Ugly. I had piano and trumpet lessons for 10 years, but no strings, so I drug my brother’s $20 Christmas present guitar out from under the bed, had dad show me chords, then set off to irritate music lovers everywhere. Giants in old time music walked the earth then, and I (and Bill Stewart and Bob Clark) tried to play with and learn from them all. Along the way I picked up the mandolin (thanks, Curt) and fiddle (thanks, Emily and Geoff), and began playing no small amount with Nancy Lippincott, another Alton cliff dweller, who doesn’t use big enough hammers on that dulcimer.  I became a 2nd generation Rebate starting in 1974 and the good times never stopped. Thankfully, Rich wasn’t hurt in his fall thru the hay bales.  I play with and still learn from Rich in the Boney Goats with Mike Saputo and the ghost of Steve Mote, and, when I can afford to pay them, in the Slickers with my old days pals Bob Clark and Bill Stewart, who knows a million tunes, and new pals David, Roy, Sean, and Rich Egan. They want me because I can play the tuba. Thanks to Bob Clark’s weekly doin’s for allowing me the opportunity to audition and have no end of fun.

Bill Stewart - Fiddle
Our friend and fellow Slicker, Bill Stewart, passed away on Saturday, March 14, 2020.  He was a great guy, a fine fiddler and a tireless champion of old-time music. 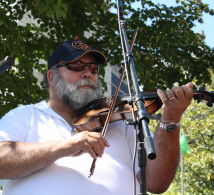 I started playing old time music in the mid to late 70's.  When I was starting to fiddle, I was exposed to Cousin Curtis and the Cash Rebates and the Geyer Street Sheiks. At the same time, I started going to the Childgrove Country dances.  Through jam sessions, I met Lindell, Bob Clark, Charlie Walden and Rich Hibbs and others.  I am most grateful to Emily Buckhannon, Chris German and Geoff Seitz from whom I learned a great deal about fiddle playing.  I am also indebted to Cousin Curtis who pushed me to fiddle in public.  Now that I've identified the cause of that, I hope the public doesn't tar and feather him.

I played with several groups, the Mississippi Mudcats, Roadkill Ramblers and the Old Time Rhythm Method for dances, but stopped playing  in public while my kids were growing up.  Several years ago, I talking with my wife about how I missed playing music with my friends.  Next thing I knew, at her instigation,  I was playing at Bob Clark's weekly session, having a great time and meeting a new set of musical friends, Sean, Roy, Rich and David.  To my surprise, they invited me along to play on the local radio station one afternoon and I've been playing with Slickers ever since.  Since joining the Slickers,  I also got to start playing with my old friend, Lindell when he filled in while David was on sabbatical and ultimately stayed on.

As a band, our motto seems to be; so many tunes, so little time.  Our other motto is; it ain't old time, it's Missouri. 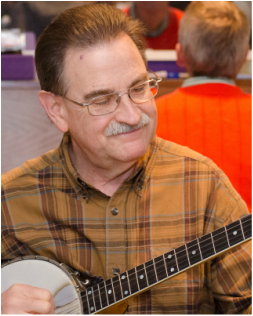 ​Now that they’ve let me out of jail, I can fill in the details on this bio.

I grew up in Alton, Illinois, but now reside in Webster Groves, Missouri.

Having been raised under the tutelage of the great Piasa Bird of Alton, Illinois, I decided to go on a vision quest.  After spending several nights alone in a cave high overlooking the Mississippi River, I discovered the true purpose of my life:  to play the 5-string banjo.

It was in the 60’s when I was in high school that I became interested in folk music.  My dad was a great ukulele player, and he showed me how to play a lot of stuff on it.  Mostly what he played were popular songs from the 20’s, 30’s, and 40’s.  As my interest in folk music grew, I became interested in playing guitar and especially the 5-string banjo.
At that time not many people where I lived played the banjo.  So I had no one to take lessons from.  Thanks to Pete Seeger’s book and watching other banjo players every chance I got, I managed to learn a little bit about it.  When I heard bluegrass music for the first time, I knew that’s what I wanted to do.  My musical heroes were Earl Scruggs, Mike Seeger, Doc Watson, and Doug Dillard.  Mike and Doc influenced me especially to go more in the direction of old-time music and the clawhammer banjo style, which is mostly what I play now.

​Over the years, I’ve played with several old-time string bands – Cousin Curtis and the Cash Rebates, Count Geoff and the Vultures, The Old Time Rhythm Method, the Roadkill Ramblers, the Boney Goat Band, and most recently, the Mound City Slickers.  I am most humbled and grateful that the Slickers have invited me to play guitar with them. 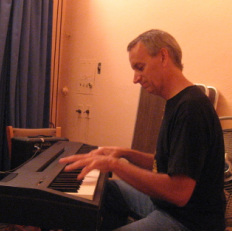 Raised just outside the Mound City in Bridgeton, MO, Rich has played ragtime piano for more than 40 years.  Always attracted to the string band sound, his favorite rag recordings were those of the Skirtlifters and the Et Cetera String Band.  Around 2003 he began to incorporate traditional tunes such as "Old Dan Tucker" into his rag repertoire.  In 2009, he became aware of old time music jams at the Folk School of St. Louis, and soon began to sit in, learning the traditional American repertoire, which led to his becoming a member of the Slickers in 2010.  To hear some of his solo recordings, visit http://www.richardeganmusic.com/ 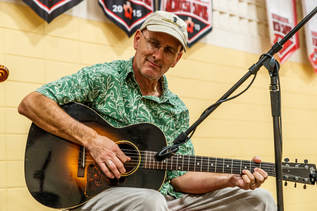 Keith Dudding was born and raised in Fairmont, Minnesota. Around the 7th grade, he started to learn to play the guitar because he wanted to sing “Gentle On My Mind” like Glen Campbell. At many a guitar mass, he could be heard strumming chords with more intensity than talent. In 8th grade, he joined his first singing group – imaginatively titled “The Group” – that performed the folk-rock hits of the early ‘70s at a local coffee house.

In 1975, the musical direction of his life was changed when a high school friend, Mark “Pete” Nelson, invited Keith to accompany him on “Mr. Bojangles” for the school talent show. Mark had learned to play banjo from his older brother, Warren, who had fronted his own folk group, Nellie’s Folk, in the ‘60s. Mark introduced Keith to pickin’ music, exposing him to John Hartford’s Areoplain, The Nitty Gritty Dirt Band’s Will The Circle Be Unbroken?, Old & In The Way, and many other taste-shaping records. They would perform as a duo their senior year of high school and as part of a band, Common Ground, during their first year at the University of Minnesota. Their lives took them in different directions – Mark’s, north to Duluth; Keith’s, south to the St. Louis area – but their musical friendship endured until Mark’s death in 2008.

In 1993, Keith began performing with his second musical mentor, Wayne Schell of Jerseyville, Illinois. Wayne is largely responsible for introducing Keith to old-time stringband music and to the brother duet singing style of The Louvin Brothers. Wayne and Keith began performing at The Lodge Brothers.  At the same time, Keith became the host of Down Yonder, a bluegrass and old-time music show on KDHX, St. Louis’s community radio station. In his now 25 years as host, he was hosted in-studio performances by many of his musical heroes, including John Hartford, Norman Blake, Sam Bush, Mike Compton, The Del McCoury Band, The Gibson Brothers, The Infamous Stringdusters, Bruce Molsky, the Foghorn String Band, and many others.

Keith has taught mandolin at the Folk School of KDHX since its inception. In addition to the Mound City Slickers, Keith also plays with two other string bands (Blind Pig, Three Crooked Men) and with The Mountain River Valley Boys, a bluegrass band.